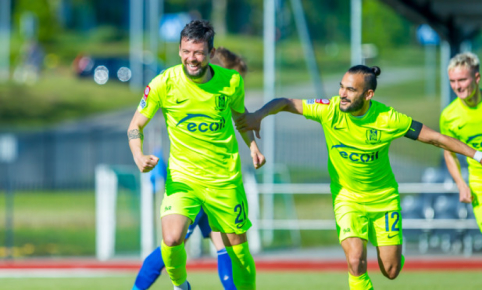 Five matches will be played from Friday to Sunday in the 30th round of the Optibet A-League.

The Roko Garast-trained team will try to get back to winning ways at home.

“Kauno Žalgiris” lost to Vilnius “Žalgiris” after a long unbeaten run, but the match proved to be solid and with a slight improvement in its quality it is possible at Can finally beat some of the first five teams. Kaunas has enough schedule to win at least half of the remaining nine games. After evaluating the situation in the standings, Kaunas Žalgiris, who has 43 points and is in sixth place, sees no choice but to win, but they will have a goal for it without Edvin Girdvainis being disqualified.

“Jonava” made two different appearances last week – they lost to “Banga” Gargždas hopelessly and won one point in the match against “Panevėžius”. The end result gives outsiders more confidence, on the other hand, the team will be a bit thinner. Artiomas Radčenka and Nahuelis Machado will miss the rest of the season due to a lack of qualifications. Andrijus Slinkinas Out in the first half of the last game due to injury. It is true that the attack of “Jonava” with Tad Eliošius in the front line can give the opponent more of a fight than before.

Žemaitija will fight for their second straight home win.

The Dziugas finally broke the ice and ended their long-held victory last week, despite continuing the losing streak. Goalkeeper Vincentas Šarkauskas has returned to the squad, but there are only six players on the bench, half of whom are very young and play erratically. Giugias are six points behind “Banga”, so to surprise the remaining seven games, they must win 3-4. This weekend in Telšiai we can expect a tough match, but “Džiugas” will not be a favorite again.

The Blues and Whites have won just one of their last seven matches and have fallen behind. Win potential prizes in terms of losing points. Coach Andrius Skerla added midfielder Vilias Armalas in the rotation, Lukas Čerkauskas also returned to the team, Vilius Armanavičius will play after his suspension. If Hegelmann loses, they could drop to second in the table and the remaining six matches will be played against representatives of the top seven. Perhaps the attack of the Kaunas district club, which is creating opportunities, will shoot in this confrontation.

The people of Panevėžys will go to Saulė with strategist Dainius Gleveckas, who replaced Valdas Urbonas.

Returning to the Optibet A League after a break of almost two weeks, the Šiauliai players drew with Banga and in the next round they are approaching the seventh safe spot. This year, the clash between these teams tends to be that only the away team wins. The less happy and perhaps more encouraging fact is that the FA “Šiauliai” have not won their last four home games, only three points have been won and they have not played. With the most capable opponent. Disqualified defender Ernestas Pilypas will not be available for this match.

“Panevėžys” have conceded just two points in their last three games, so after a poor draw and a draw in Jonava, the club said goodbye to the leaders who started the season. Coach V. Urbon. This week the people of Panevėžys have already played one game, with D. Gleveckos as manager, they beat Marijampolė City in the quarterfinals of the “Hegelmann LFF Cup” by a score of 2: 0. At the time, Ernestas Veliulis scored twice, but it was clear “Panevėžys”, having organized the team, was not overdoing it and was concentrating on Saturday’s clash – a defeat could push the team out. From the 4th rank.

For “Sūduva” who stumbled unexpectedly in Telšiai, this will be the next step in Fight against direct opponents.

Male coach Miguel Moreira suffered a second defeat with Marijampolė, but this did not allow him to beat “Panevėžys” and move up to second place based on points lost. The team’s most productive players, Kule Mbombo, have yet to play in the fall, but Danilas Kondrakovas and Karolis Laukžemis are starting to catch on, and a rivalry with “Banga” could be a good chance to score. The ball. “Sūduva”‘s chances are given a positive connotation by the last 4 home games in “Optibet A League” then 12 points are won.

After three minimal defeats in a row, “Banga” added four points to its dowry last week, and this allowed it to continue to lead “Džiugo” with an unexpected victory. With seven games left and Gargždi having a more favorable schedule than Giugi, they are six points clear at the top of the table. Striker David Afonso will be without the services of Shogo Yoshikawa and Goncalo Vieira, but the return of Mauricio Pinto has strengthened the defense, which has the potential to cause a lot of problems for the hosts.

The two clubs will face off this year in the fourth Vilnius Derby in the Optibet A League.

“Zalgiris” felt more confident at the top of the match after the victory in the final round and the stumbling of the opponent. The Capital Club are seven points ahead of the “Hegelmann” footballer, the bottom step, who has played five more games. On Thursday, Žalgiris had a draw with “Basel”, but the upcoming national team break and short break should force Mr. Coach Vladimir Cheburin to throw key players into the game. With the win, “Zalgiris” will not allow the “Knights” to win just one point this season.

However, galgiris will face a very confident opponent, winning 10 points and conceding just one goal in their last four matches. The composition of the “Knights” deepened as the most important confrontation of the season approached, not only did defender Marko Nikoličius join the team. The team, coached by Pablo Villar, are still sixth in terms of points lost, but they were able to recover during the difficult period and were able to take advantage of the fact that “Žalgiris” played a tough game on Thursday.