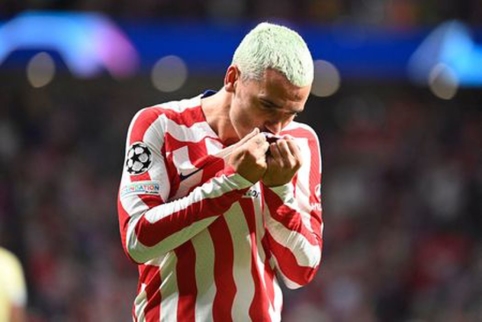 Atletico Madrid are currently in a very interesting situation regarding the transfer of Antoine Griezmann.

Recently, football fans may have noticed that A. Griezmann stepped onto the pitch in Atletico’s game from the 60th minute.

If the Frenchman can play for more minutes then after this season, Madrid will have to pay Barcos 40 40 million.

នឹង️ Nothing will change Atlético Madrid’s roadmap at this time: Antoine Griezmann will continue to be off the pitch from the 60th minute. 🇫🇷

According to “Atletico” the deal is that the club will have to pay លាន 40 million to the Catalans unless the striker plays more than 50 per cent of minutes in two seasons. The club calculated that this would not have happened unless Griezmann started his game from the 60th minute.

However, the fun does not end here. “El Larguero” announced that Barcelona are already trying to claim លាន 40 million because they believe A. Griezmann must be Atletico player now, according to the contract.

Sources from Barca claim that the deal is 1 + 1. If A. Griezmann played more than 50 per cent of games last season, Atletico would have paid លាន 40 million even then. Otherwise, the lease will have to continue for another season.

The 31-year-old played more than 50% of the game last season. Match but Atletico denied information about the deal.

🚨More: Sources in Barça say the deal goes beyond the 1 + 1 agreement. If Griezmann plays 50% of the games in the first year, Atleti will be obliged to pay លាន 40 million and get him permanently. Otherwise, the loan will automatically renew for the second season. @SiqueRodriguez # Transfer money 💰