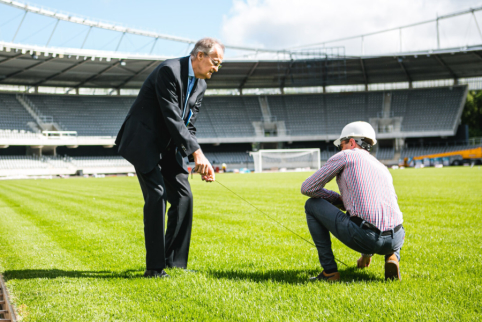 The inspector general of the European Football Association (UEFA), who visited Kaunas in July, positively assessed the progress of the reconstruction of the Darius and Girėnas stadiums in his official report. Guests from Serbia chose a well-planned venue, and no wonder that after the completion of all work, the structure will meet the requirements of the fourth category. It will be the only stadium in Lithuania to open its doors to the highest level of football.

On 12 July, the Kaunas received the UEFA’s inspectors’ second visit this year. The progress of the stadium renovation was first assessed in March. Although the opening of a state-of-the-art facility was expected in the summer of this year, plans were revised by the Russian-led war in Ukraine in February, and transportation was disrupted because of it.

“The general impression is that after all the work is done, the stadium will meet the standards of the fourth category. For this reason, it will be necessary to conduct another inspection in the future, assessing the entire infrastructure set up for football, “read the official UEFA report.

During the second visit, the inspector praised the equipment for the disabled. 15,000 stadiums for fans with a total of about 300 seats and 20 toilets for the disabled. Guests also allocated media space both in the stands and indoors.

Late last year, FIFA President Gianni Infantino, who visited Kaunas, assessed the progress of the reconstruction of the Darius and Girėnas stadiums. Guests came to watch the final of the World Cup in “algiris ហើយ and decided to stop to see the first stadium of this scale in Lithuania, Ĺžuolyne, Kaunas.

“In July, the inspectors could not fully assess the stadium because we have unfinished work,” he said. But now the workers are removing the minor defects that have been noticed so that things are completed perfectly to the last detail. Two large screens are already hanging above the table for results and playback.

The building is expected to be handed over to the state commission in August. We ourselves are patiently waiting in the meantime, together with the people of Kaunas and the people of Lithuania as a whole, “said Kaunas Deputy Mayor Andrius Palionis.

After the reconstruction, the Darius and Girėnas stadiums will be the largest in Lithuania and among the most modern in the Baltic states. During major concerts, the venue will accommodate more than twice as many spectators – up to 30,000. During sporting events, fans will be protected from adverse weather conditions by the roof covering the seats, and the hybrid green grass, heated and watered automatically, will ensure the necessary conditions on the field for the athlete at all times. Years.

The football field is surrounded by three layers of the highest quality granite, certified by the World Athletics Federation for track and field and other aspects of athletics that reduce the risk of injury to athletes.

Now the home appliances are also more comfortable – the changing rooms, toilets and other facilities have been basically renovated. Sports and recreation facilities in Žaliakalny will be complemented by the reconstruction of the sports hall, the renovation of Đžuolynas and the renovation of Sport Street. There is also a new outdoor tennis court.

With the stadium in the mood for graduation and preparations for a new home this month, Kaunas City Hall has announced bids for concessions for nearby stadiums and stadiums. Those who wish to participate in the competition are invited to apply until September 27.

After concluding a 15-year long-term contract, the historical objects of the city will be handed over to an operator.