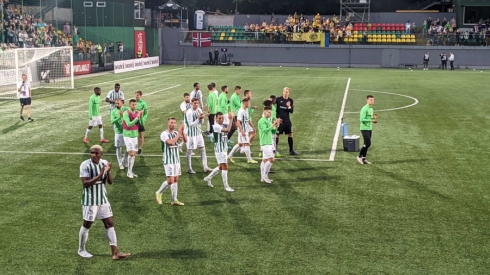 Bulgaria won their first match at home 1-0 and both winners will advance to the UEFA Europa League group stage.

The home team got off to a great start and in the first minute F. Ourega scored a goal and equalized the result.

The Bulgarians were stuck trying to support “Žalgiris” at the wall and in the 8th minute. M. Tissera marked himself with the right shot (1: 1).

Vilnius is no longer afraid of famous opponents in the 15th minute. After the passing of Renan O. Buff gave the A League champions the lead again (2: 1).

In the second half, great fighting continued on the field. In the 57th minute, M. Tissera scored his second goal (2: 2), but in the 63rd minute. With a great goal, Renan once again benefited Žalgiris (3: 2).

No more goals are scored in the remaining time and the team is required to play overtime.

At the end of extra time, the referee decided to award a dubious 11m penalty for “Žalgiris” ‘s goal, which was confidently scored by O. Verdonas – 3: 3.

The meeting ended like this – Vilnius will be satisfied with the game in the Conference League.