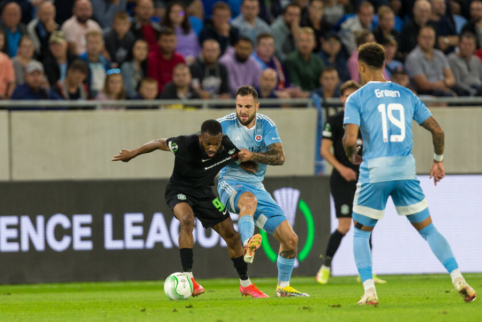 In the first match of the UEFA European Conference League “Žalgiris” won the first point – the match against “Slovan” Bratislava ended 0: 0.

“Žalgiris” will play the next match on September 15. At home vs. Basel.

There were two changes in Zalgiris’ composition compared to the last qualifier against Ludogorets. Joel Bopesu and Francis Kyeremeh started the match early. J. Bopesu took the right wing and M. Paveličius returned to center-back position.

The most dangerous attack was initially created by the host. 10 minutes after receiving the ball in the penalty area A. Barseghyan shot from 16 meters. A minute later, G. Chakvetadze hit from a distance.

The most dangerous attack was initially created by the host. 10 minutes after receiving the ball in the penalty area A. Barseghyan shot from 16 meters. A minute later, G. Chakvetadze hit from a distance.

20 minutes. M. Miličkovičius tried his luck from a distance, the attempt failed. 22 minutes into the counterattack, M. Oyewusi almost lost the ball to the opponent goalkeeper.

28 minutes after F. Kyeremeh raid in the center of the penalty area, F. Ourega had a chance but his shot was blocked – the ball flew over the target.

30 minutes The home side also had a chance, good luck after a pass from the right wing U. Agbo shot from the center of the penalty area.

33 minutes. After F. Kyeremeh pass, M. Oyewusi jumped to the center of the field but could not get the ball past the keeper.

In the 43rd minute, F. Ourega fired a dangerous shot from the left side of the box which went wide. 44 minutes M. Miličković kick is blocked by a defender and P. Mamić’s powerful ball flies over the target.

During extra time of the first half, after a P. Mamić F. Kyeremeh shot from outside, the ball was caught by the goalkeeper.

At the beginning of the second half “Žalgiris” had a great opportunity. In a quick attack, F. Ourega broke the ball into the penalty area at the edge, confusing the defense and kicking. Right towards the far corner of the ball. M. Oyewusi reached the ball flying near the post but he could not find the goal from a distance.

51 minutes after a pass from the left E. Ramirez had a dangerous lead, the ball was saved by E. Gertmons. After a minute, “Žalgiris” had already attacked and F. Kyeremeh fired from a distance near the target.

In the 54th minute, G. Chakvetadze broke the deadlock from the left corner and had a good chance, but the shot was saved by E. Gertmons again.

62 minutes The people of Vilnius also had a great opportunity. After F. Ourega’s pass to the far post, F. Kyeremeh found himself free on the right side about 8 meters from the target, but his shot hit the target.

In the 84th minute, M. Abena’s header hit the crossbar.