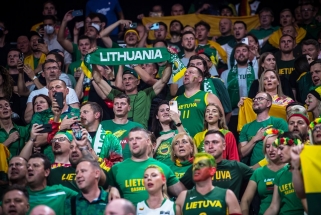 Nearly 1.5 million people in the country, or more than half of Lithuania, watched the Lithuanian national team play in the European Basketball Championship, according to “Kantar” data. The highest rating of the program is 15.8%, achieved by the fateful match between Lithuania and Spain, after which our national team finished its competition in the championship. Many spectators were also gathered in front of the television with Lithuania’s match against Slovenia. As with Hungary – the overall rating of these programs exceeds 13 percent. Matches against Germany and Bosnia and Herzegovina were reduced by more than 10 percent. Attendees. “Basketball really dominated the screen in the first half of September. During the match against Spain, every second TV spectator was watched in this broadcast. After the Lithuanian national team ended up participating in Round 16 Championships Fans’ interest begins to wane naturally without their teams, but without a doubt basketball broadcasts will be on the list of most popular shows in Miss Lina Petraitienė, Head of Media Research The European Men’s Basketball Championships are being held for the 41st time this year, after a five-year hiatus, taking place in Cologne, Germany from the 1st to the 1st. September 18. In Lithuania, the match was broadcast by TV3 Media Network.