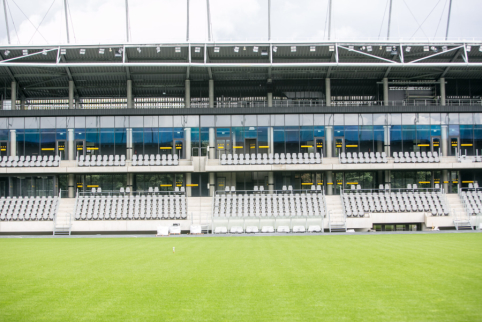 15,000 seats, roof on the stand, two large screens, automatic watering and heating, green grass and a top quality runway. All of these are just some of the advantages of the new Darius and Girėnas stadiums, which were rebuilt from the ground up. Athletes and spectators will try them out soon, and September 19 will mark the country’s sporting history, the official date of completion of the building. Opening is scheduled for mid-October: a football match, a festive concert and an opportunity for thousands of Kaunas residents to visit the only stadium of this size in the country.

September 19 is the day of stadium rebuilding. This was announced in an official letter by the State Land Management and Construction Inspectorate, which evaluated the work performed on the object last month. After the reconstruction was completed, the builders left and left room for the cleaners.

“Lithuania lives too long without a decent stadium. That shame will finally be washed away and we can be happy today. You will no longer have a face at the World Cup. As the jealous local king tried to stick the stick in the circle and the suspect’s tongue chatted about who had fallen, the Kaunas worked steadily and deliberately, believing the set goal and pursuing it. Today we can be proud – the project was implemented and today the stadium was handed over to the State Commission. This is a great achievement not only for the people of Kaunas, but also for the people of the whole country, ”said Kaunas Mayor Visvaldas Matijošaitis.

The opening ceremony of the Darius and Girėnas stadiums is scheduled for mid-October. It is planned that the event will surprise not only football fans rushing to the seats, but also the audience indifferent to the big music events. More information coming soon.

The largest and most modern in Lithuania

It took 11,000 to build the stadium from the ground up. Cubic meters of monolithic reinforced concrete, 3.5 thousand. Cubic meters of prefabricated reinforced concrete products and about 1.5 thousand. Tons of steel structures. The 33-kilometer-long heat pipe was placed under a “sewn” hybrid green grass. Next to it are heated seats for team runners, track and field athletes, as well as throwing and hammer sections and equipment for jumping events.

“It is the largest stadium in Lithuania and one of the most modern stadiums in the Baltic states. The war was started by Russia in Ukraine and the disruption of the transport chain as a result delayed the completion of construction and reopening by autumn. However, the contractors put maximum effort to finish things as quickly as possible – about 300 people are working here at the same time. “From now on, the center of Lithuania is really in Kaunas,” said Tadas Metelionis, director of Kaunas.

15,000 high-rise buildings are covered with roofs against adverse weather conditions. During the concert, the stadium will double in size. In space there are two large screens for output and broadcast. Sports and music events will be lit by over 400 lanterns and lanterns during the dark hours of the day.

Home furnishings include a new dressing room, a press conference room, a VIP lounge, a studio mirror for television broadcasts and other facilities necessary for a stadium of modern standard. Comfortable working conditions for media representatives are created here.

In order for the stadium to host top-level football matches and for the venue to comply with Category 4, an appropriate license is required. It is expected to receive this year.

Representatives of the European Football Association (UEFA), who visited the Darius i Girėnas in mid-summer, praised the facilities for the disabled. In total, there are about 300 places for the disabled throughout the stadium and 20 toilets.

The completed building and the infrastructure installed in it will also be appreciated by the athlete representatives.

Looking for an administrator

Until the selection of a new stadium operator who will manage the newly built Kaunas Sports Hall, these facilities will be temporarily managed by the Kaunas “Startas” Sports School.

Candidates for the concession bid can apply until September 27. A 15-year long-term contract is being finalized with the winner.