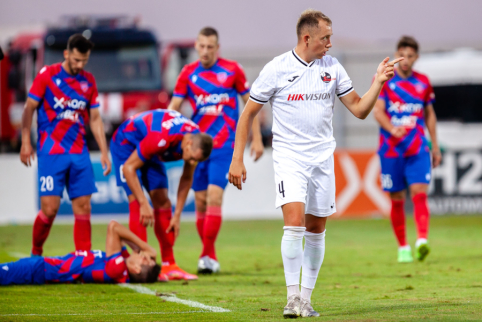 The symbol selection of the 26th round of the “Optibet A League” consists of players from four teams.

Armantas Vitkauskas (Knights of Vilnius): The Capital Club won a significant victory in Panevėžys and improved its position in the fight for a place on the international stage. A. Vitkauskas plays confidently in a major challenge and keeps the goal “dry”.

Seth Sincere (“Kaunas Žalgiris”): The right-back, who joined the club this summer, did not take long to find a place in the starting line-up. The Nigerian footballer, who spent nearly 70 minutes on the pitch, was noticed in the attack and successfully managed the task in front of his target.

Nemanja Lakičius-Pesičius (Knights of Vilnius): Coincidentally or not, but with the arrival of this legionnaire from Serbia “Knights” received very few goals. Not only that, N. Lakičius-Pešičius contributed to the victory when he hit the head well in the last minute at Panevėžys.

Edvinas Girdvainis (“Kaunas Žalgiris”): The people of Kaunas often threatened Telšiai “Džiugu” during the standard situation and that decided the match. In this composition, the Lithuanian national team defender played hard, scoring his second goal of the season after a corner.

Markas Beneta (“Sūduva” from Marijampole): In the middle of last week, the Sudanese player had to play not on the right but on the left side of the defense. The man from Klaipėda endured this challenge successfully and actively in attack – when his powerful shot almost became a target.

Olivier Rommensas (“Sūduva” of Marijampole): Legionnaires from Belgium completed a goal drought for nearly four months in a match against “Hegelmann” Kaunas. O. Rommensas marked himself with a long-range shot and stood out with a “key” that posed a serious threat to opponents.

Antonas Fase (“Kaunas Žalgiris”): It can be confirmed that football players from the Netherlands rushed into the “Optibet A League” like a whirlwind. In last week’s match against Džiugu A. Fase, marked by his speed, he played very well – he scored the first goal and passed the ball to his teammates.

Darius Zubauskas (Gargždų “Banga”): Another “Banga” attacker – D. Zubauskas – became R. Vēžević’s main shooter in Jonava. The striker has passed as many as 3 Assists and all those passes are specially designed. For teammates who have completed the “Poker” game.

Nerijus Valskis (“Kaunas Žalgiris”): The 35-year-old striker, who has more playing time, is already paying dividends for Kaunas Žalgiri. In the match against “Džiugu” N. Valskis played for just over half an hour, but during that time he was able to score twice.