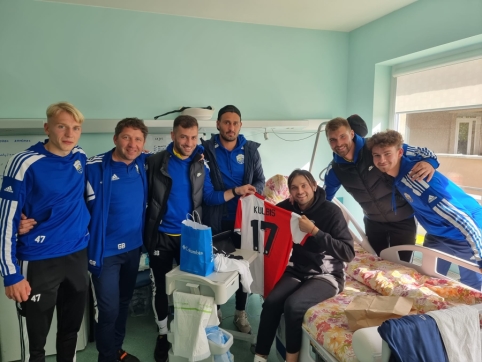 
“TransInvest” players visit defender Gajai Kulbis, who is recovering from a serious injury in hospital.

It was posted on the group’s social media. In the network account:

After Sunday’s win over FM Klaipėda, members of the FK “TransINVEST” of Vilnius district immediately went to Palanga Rehabilitation Hospital to visit Gajaus Kulbis, who was recovering. Injured while playing. This team 4 months ago.

As soon as we entered the ward, Gaius greeted us warmly and wanted to leave his ward as soon as possible. Possible.

After being presented with the gift of “Geležinio Vilko” shirt and “Feyenoord” club shirt with the signature of the UEFA Conference League 21/22 final, we would like to thank “Sportpoint” and Augustin Kubiliūnas on behalf of the club. . He talked about his healing, his predictions, and his spare time.

Probably everyone who has ever met Guy, on or off the field, knows his strong character and willingness to help him a lot in his rehabilitation. After the operation, Gaius told his doctor that he would be back in three months.

He has already done it after the difficult restoration that happens every day.

One of Gaius’ greatest achievements was his 12-step walk, which doctors considered a miracle.

When asked about his free time, the first thing that comes to mind is his family, but football is not forgotten. He joked that after watching a lot of leagues as well as matches played by FK TransINVEST, he could be one of the best football players and analysts. “Before leaving, the teammates wished Gajai good health, his strength and his big dream would come true – to welcome the new year at home with his family.”