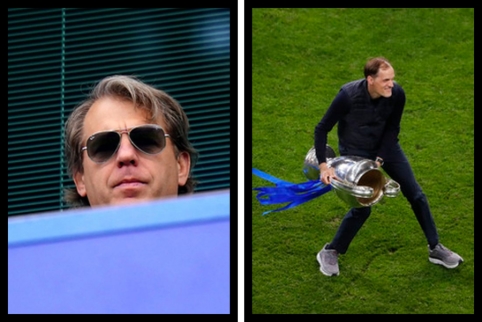 If anyone wants to describe the last four years at Chelsea, chaos is probably the only word that fits.

For four years, the London club received a one-year transfer ban during which Frank Lampard stabilized the club. The club heroes were later fired and specialist Thomas Tuchel was hired. The German surprised Chelsea in the Champions League and it was a remarkable achievement, beating a team like Real or Manchester City who have had years of success with their managers.

The end of last season was also a mess for Chelsea. After the invasion of Ukraine by the Russian army, Roman Abramovich deserved to leave the club forever. At the time, not a single fan turned away from the “aristocracy”, it is not known who could buy the club at the time or whether it was possible due to sanctions against Abramovich. Despite everything, Thomas Tuchel remained loyal to the club, where he worked for over a year. The German took everything as it was and earned the respect of the team’s fans from the human side.

However, about six months later, T. Tuchel lost his job at the club. Was this the decision of new owner Todd Boehly? Maybe yes, such a decision seems stupid and hasty.

Of course, the start of the season is difficult for Chelsea, but it should not be easy to add seven new players and two young players who have just returned from loan. The game was tough, the team’s attack looked weak and the “nobles” looked their best. In the game against Tottenham they did not win (2: 2). Yesterday’s defeat against Dinamo did not make the situation any easier.

The most important thing here is about the transfer market, which London clubs spend the most among all European clubs in the transfer market. It is clear that this is Todd Boehly’s ambition – to show that the club will not go down after the Abramovich era and that investment will continue to be high. It is clear that this spending is a fulfillment of Thomas Tuchel’s wish. The team needs at least two center-backs at a cost of more than លាន 100 million. Pound. Teams also need strikers – they are bought. Chelsea broke the Premier League record for most spending in the single transfer market.

In this situation, the transfer of Pierre-Emerick Aubameyang is the most interesting. Both Gabonese and Tuchel want to join forces after working in Borussia in 2017. “We had some good times together in Dortmund so I am very happy to be back in Tuchel’s squad again,” said the striker after joining the club. Negotiations with Barcelona have been tumultuous for weeks, but it is clear that Todd Boehly has sent a message to the German that he trusts him.

Less than three games after the transfer of Aubameyang, Thomas Tuchel is no longer at Chelsea. There is a saying that when a new owner comes to work, he likes to replace most of the staff on time and this is what happened in Chelsea. Sports director Marina Granovskaia, Petr Cech and other key members of the management are parting ways this summer, but few expect Thomas Tuchel to part ways any time soon. The Gabonese move to Chelsea best describes this seemingly bizarre situation.

It is well known that former Chelsea owner Roman Abramovich is pleased with the immediate dismissal of a non-functioning manager. Maybe Todd Boehly is not a dictator, but a first step towards that.

With Chelsea, Thomas Tuchel has won 60 of 100 games and at least he can leave the club with a clear conscience.

One of the greatest managers in the history of Chelsea football. pic.twitter.com/JZd9DUMijW